Dr Pepper is a carbonated soft drink, created by Charles Alderton, an American Pharmacist, back in the 1880s. He made the beverage while employed at Morrison’s Old Corner Drug Store which is located in Waco, Texas and later gave the formula for the soft drink to his boss, Wade Morrison who later named it Dr Pepper. There are several theories as to why Morrison selected that name for the product including that they added Dr to the name to suggest medicinal properties, a practice popular at the time or that the product was in fact named for a real Dr. Pepper, for reasons ranging from the aforementioned Doctor having given Morrison his first job to attempting to curry favour with the Doctor so that he would be inclined to allow Morrison to marry his daughter. The real reason however appears to have been lost to time. Dr Pepper is distributed worldwide today, with various regional manufacturers including Keurig Dr Pepper (in the United States), The Coca-Cola Company (in Europe and South Korea) and PepsiCo (in Canada and Oceania).

As well as the traditional flavour, they also have a variety of variants including Heritage Dr Pepper (which is the original recipe variant without corn syrup), Diet Dr Pepper, Caffeine Free Dr Pepper, Cherry Vanilla Dr Pepper, Dr Pepper Vanilla Float and Dr Pepper TEN just to name a few. 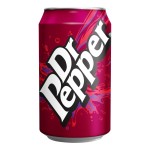 Hot Doctor Pepper
Hot Doctor Pepper as you may have guessed from the name is a heated up version of Dr Pepper. It was Initially conceived of in the early 1960s, as a marketing ploy to help pitch their typically chilled drink during the colder, winter months. They suggested serving the drink hot (warmed to 180 degrees) and then adding a slice of lemon. You can check out one of the original ads for Hot Dr Pepper here if you’re interested.

I read about this at Christmas and decided a couple of days ago to actually go ahead. I tried it with and without lemon and I’ll tell you my thoughts on both.

Without lemon
It still has that rich Dr Pepper smell, some of the overall taste has been lost, mostly because in heating it, the drink has gone flat but it’s surprisingly palatable, the heat really gives it something else, it’s smooth and rich and just sweet enough. I could easily see why this souls become a holiday drink. I think I still prefer just regular Dr Pepper but this isn’t just an interesting gimmick, it’s a flavourful and neat little drink that warms you up, is simple to prepare and I would happily drink again.

With Lemon
The addition of a simple slice of lemon changes the flavour profile quite a bit, the heat really brings out the lemon and the flat sugar takes away from the sourness with some sweetness. It makes for a slightly more complex drink, but it’s equally as enjoyable with or without lemon.

My name is Thomas Neil, I am 25 years old and based in Scotland. I am the founder and editor here at Off the Record, my interests include music, books and video games so that's what I plan to write about. View all posts by Thomas Neil