Oshee Vitamin are a product line of vitamin enriched soft drinks made in Poland by a company called Oshee, noted for being a brand for active lifestyles, they also have lines called Oshee Natural and Oshee Sport. I’ve been a fan of their Multifruit flavoured Oshee Sports drinks for a while, so when the opportunity to try the vitamin line popped up I jumped at the chance.

Electrolytes + Vitamins (Dark Blue)
So this one is mint and lemon flavoured which I wasn’t too sure about but frankly I think it works quite well, the mint adds a tartness to it that’s surprisingly moreish, and according to the can this is great for after intense physical exercise or after consuming alcohol to curb a hangover, so its not only a refreshing beverage with an interesting taste, but it’s also good for you, obviously in moderation, as it refreshes much needed nutrients in the body.

Magnesium + B6 + Vitamin B5 (Light Blue)
A light, refreshing tropical flavoured drink that I will definitely be buying again, it’s especially good during hot weather, and tastes equally good chilled or at room temperature plus like the other products in the line for Oshee, it contains plenty of nutrients to give you a nice boost throughout the day. 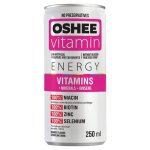 Vitamins + Minerals (Pink)
A strong orange flavour that blends well with the refreshing mix of the drink, I think this one is probably my favourite of the four, partly because it’s the most uncomplicated flavour out of them all but also just personally for me because I really enjoy orange drinks. It does seem kind of weird though that the can with the orange design isn’t for the orange flavoured drink.

Vitamin D + K + Calcium + Vitamin C (Orange)
This one is mint, lemon and lime flavour but because mint is such a prominent flavour it doesn’t taste a lot like the Electrolytes + Vitamins one above, although the addition of lime does change the taste somewhat, in fact I actually thing that the introduction of lime improves the overall flavour, it still tastes like a non alcoholic Mojito but it’s incredibly refreshing and comes in at a close second behind the product above in terms of my personal favourites.