So first, a little about the company, Fentimans are an independent botanical brewery based in Hexham, Northumberland which was established in 1905. Their mascot is the the dog of founder Thomas Fentiman, which is a German Shepherd called ‘Fearless’. Their unique botanical brewing process has remained relatively unchanged for over a hundred years, with the techniques and expertise involved being passed from generations of the Fentiman family. 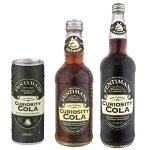 Curiosity Cola Flavour
This is a lot sweeter than regular cola, and the distinct fermentation process gives the final product a unique herbal flavour which really adds to the overall taste. It’s incredibly refreshing, and while the bottle suggests you served it chilled, and it does improve the overall experience when served as such, there’s no significant drop off in quality when served at room temperature. It hits that sweet spot, if you’ll pardon the pun, between being sweet without also being cloying, there’s none of that clinging to the back of your throat that you get with some soft drinks. 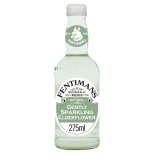 Sparkling Elderflower Flavour
I usually don’t like Elderflower that much, I think it tends to be a little too sour, and overall, for me at least is not an appealing taste experience. However this is light, and crisp, and has a flavour profile that finds that fine line between bitterness and sweetness that makes it surprisingly moreish. It’s all the better because much like the cola above, it’s botanically brewed and has picked up a unique flavour as a result. 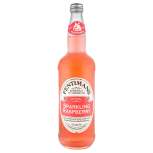 Sparkling Raspberry Flavour
This manages to capture the raw flavour and tartness of raspberries while also being soft and subtle on the palate at the same time. The lightness of the overall flavours was not expected and worked surprisingly well. It left a drink which was refreshing and crisp, while also still having a distinct flavour.

I am a 25-year-old media professional from Scotland. I am the founder and editor-in-chief of Off the Record. View all posts by Tom Neil