I’ve talked about Greggs before, in fact the last time was when I was reviewing their Vegan Sausage Roll, which you can check out here if you are interested. So I won’t give you the full introduction to the company, what I will say is that Greggs is a UK based bakery chain, which sells a variety of delicious products including as mentioned above Sausage rolls (both vegan and meat), sandwiches, pies, sweets, confections and various bakes: including chicken, cheese & onion and steak (and I’ll be discussing the vegan version of that today). So you can pop into any of the approximately 2,009 Greggs stored across the UK and purchase any of these lovely items, and you can even order ahead, or gift someone a bite to eat, and you can find out more about that here.

Vegan Steak Bake
So I bought an original and a vegan steak bake a few days ago, they were placed into identical bags so that I couldn’t tell which was which and I did a blind taste test, and while it was obvious from the first bite that I had in fact bit into the vegan steak bake, it was an entirely pleasant experience. My first thought was that it had a slight more tart taste than I was expecting, I think possibly either because, obviously Quorn is going to taste different to beef, or more likely because the vegan steak bake includes diced onions, which mixed with the Quorn mince and the gravy, is bound to produce a different and unique taste. It hits the palate well, and I actually really enjoyed it, I can’t honestly say I prefer it to the vegan sausage roll, which in my opinion was fantastic, but it certainly competes with the original steak bake. Now I went in blind, and as I don’t have any dietary restrictions, I can eat and enjoy both the original and vegan steak bakes, but just so you know you are eating the right one, Greggs was nice enough to change the design, the original has a horizontal lined design on the top, while the vegan version has vertical lines instead. The Vegan version is also slightly paler, and from what I’ve been able to find out, this is due to not have been egg washed prior to baking.

Okay final notes, the original obvious is great, nice thick chunks of meat, and a delicious savoury gravy, the vegan version tastes just as good in my opinion, although in a different way, which I think makes it better. It is thinner, due I assume to the use of mice as opposed to chunks of meat (or indeed a meat substitute) but it’s well worth trying out, even if you don’t like it I’m sure it’ll upset Piers Morgan which is worth it on its own. 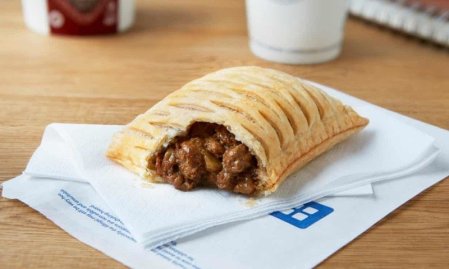