Now I’m a huge fan of caffeine in general and energy drinks in particular, anyone who has read my product review of Irn Bru and Coca Cola Energy can attest to that, in fact I’m such a huge aficionado that I am on a waiting list, to be informed when Scotty P’s Big Mug Coffee (owned by Scott Patterson, known for his role as diner owner and love interest, Luke Danes, from the hit series Gilmore Girls) comes to the UK. So when I saw this product in the store the other day I decided to put on my reviewing hat again and talk about WOW Focus, a nootropic blended energy drink, designed to, as the label tells me, reduce fatigue and support mental performance.

Before we move on, I’d like to quickly say that nootropics (commonly referred to as cognitive enhancers or smart drugs) are not fully understood at this time, they aren’t quite pseudoscience as research has indicated at least some of the substances and compounds that make nootropics can and do have an impact on focus, alertness and overall cognitive function but at this stage the data isn’t conclusive enough to say one way or another, so in general you should take the phrase itself with a grain of salt, that being said, caffeine, one of the components of this product in particular is well noted for boosting focus and keeping you alert so this product makes no claims that it cannot back up.

Next, I’d like to say that I feel like I’m getting myself set up for a bit of a disappointment, I know the term nootropic from research into the real life potential existence of drugs like NZT (or NZT-48) made famous from the Movie Limitless, and the TV series based on the movie of the same name. I know that as I said above, the results of research into such real life products are mixed and there is currently no drug on the planet that can produce effects such as those in the movie, firstly because we have not advanced to the point scientifically where we can boost our cognitive ability so much, but also because that movie/drug in particular is based on the fallacy that we only use a portion of our brain power, more colloquially the 10% (or some other small percentage) myth and that is incorrect, instead we use all of our brain, but areas are specialised for specific tasks. But despite that awareness I’m still hoping that as soon as I take my first sip my brain power will be kicked into overdrive.

Okay now that we’ve got that all out of the way, let me tell you a little about the company that makes this product, WOW (or WOW Food and Drinks Ltd) is a Food & Beverages company whose philosophy is one that really resonates with me, and I will just quote it directly from their site, “We called our company WOW because every time our customers tried our drinks that’s what they said. So our philosophy is simple; if we don’t get a WOW, we won’t make it.” So by all accounts, they are a company that cares about two things, quality and their customers, and in my book that makes them well worth checking out.

Just before I talk about what I think of the product, I want to say that I don’t want what I’ve written about Nootropics above to be taken as a criticism of this product, they’ve made no claims to the product that it cannot fulfill and while there’s still research to be done on Nootropics in general, they have scientific merit, so don’t prejudge this product, I just put the section above, to be fair and balanced and to make sure that I’m supply my readers with all the information as well as helping them to find products they might be interested in trying. 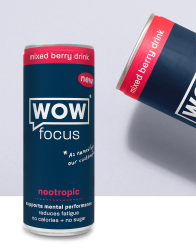 WOW Focus (Mixed Berry – Nootropic Blend)
Okay so finally we arrive at my review of the product, it’s quite light on the palate but not overly so, it still had body and flavour. It tastes nice as well, which I’ll admit isn’t a requirement in my caffeine delivery system but is sure a positive. It tastes better slightly chilled, but there was no massive dip in quality when left out at room temperature. I said above that it’s fairly light, and it’s certainly refreshing, but it has a little kick at the back of it that makes you feel like it’s working. Sadly I cannot suddenly learn a foreign language with minimal effort, but the drink never claimed as much, and overall it’s a robust little drink that tastes good and gives me that burst of energy I need as a hardworking freelance journalist on the go. Lastly, while I don’t usually go WOW at things, I sure was impressed by this one, and I’ll certainly be buying it again.

Off the Record is and always will be a free platform, but if you like what we do and want to contribute to the production of future content then follow this link and leave a tip.

My name is Thomas Neil, I am 25 years old and based in Scotland. I am the founder and editor here at Off the Record, my interests include music, books and video games so that's what I plan to write about. View all posts by Thomas Neil